In 2017 we are all about lifestyle. The 24 hour split of eight hours work, eight hours rest and eight hours recreation seems like a simple formula, especially in an era where work/life balance is all the rage. But if you journey back in time just 100 years, the eight hour lifestyle formula was something Sydney’s workers had to fight for.

As we celebrate the centenary of the 1917 Great Strike this year, we also commemorate one of the greatest strike actions Sydney’s workforce has ever undertaken. It’s a time to reflect on the progress we may have made as a society.

Celebrated and remembered on the site of Carriageworks Eveleigh, once a giant railway work shop, The City of Sydney has lent historians to the art project to help inform the exhibition and bring it to life. Historians have joined forces with Carriageworks’ curator Nina Miall to develop a multi-faceted exhibition and events program for the public. Artists from all over Australia were invited to respond to the historical events of The Great Strike and The City of Sydney has also loaned Carriageworks certain artefacts and ephemera from their deep trove. 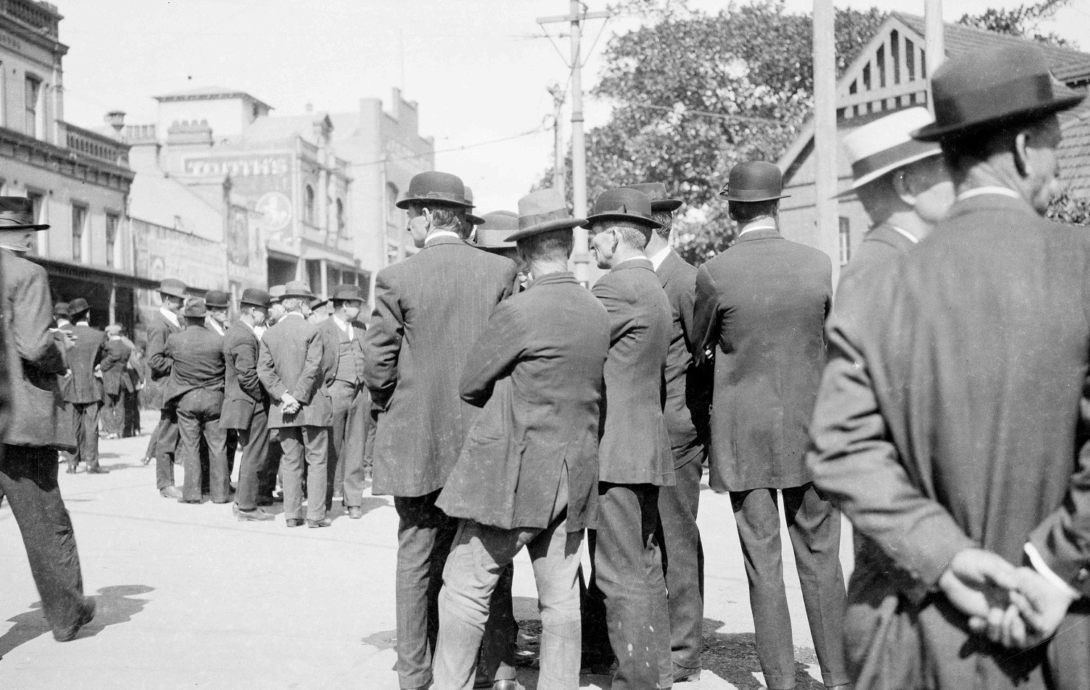 Striking men gathered outside the Railway Institute at Central Station during the Great Strike of 1917. Image courtesy of the State Library of NSW.

The City of Sydney was keen to be involved in the exhibition to demonstrate the importance of our shared history, and how it can help inform the future. Looking back in order to look forward is a curious starting point for most artists, but as we discover it was not entirely foreign to them. While some artists have taken a directly political look at the left movement, labor unions and worker’s rights, others have focused on the socio-cultural legacy the Strike left in its tracks.

Schoolboy strike-breakers with a 30 class tank engine, draped with a Union Jack flag to demonstrate their loyalty during the Great Strike of 1917. Image courtesy of the State Library of NSW.

Sydney-based artist Sarah Contos focused her elaborate patchwork quilt on the humane and universal contribution made by women to The Great Strike. In contrast, Darwin-based printmaker Franck Gohier has created an enormous ‘snakes-and-ladder’ installation which explores the graphic language of trade unions, through symbolism and historic imagery.

To learn more, we caught up with Franck Gohier from his studio in Darwin and sat down for a cup of tea with Sarah Contos in Sydney. We wanted to know a bit more about the process of making the work along with how history helped to get them on the road to making tracks. 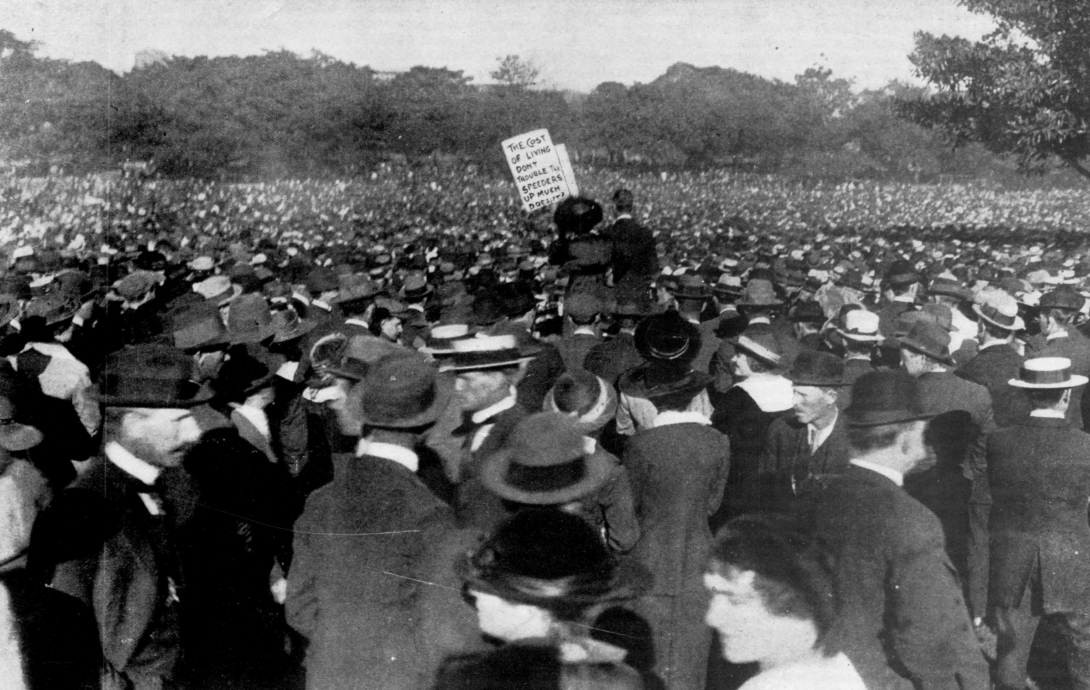 A gathering of 100,000 men and women in The Domain on a Saturday during the Great Strike of 1917. Image courtesy of the National Library of Australia.

Using the Victoria era children’s game of snakes and ladders wasn’t on the cards from the outset. But Franck Gohier’s investigation into the great strike led him to look at old placards, posters and the printed materials strikers distributed.

“I’m a professional print maker and I have always been fascinated by typography and the various fonts of various époques. I was interested in looking at what was happening around the world both in the USSR and also with the end of the first world war. 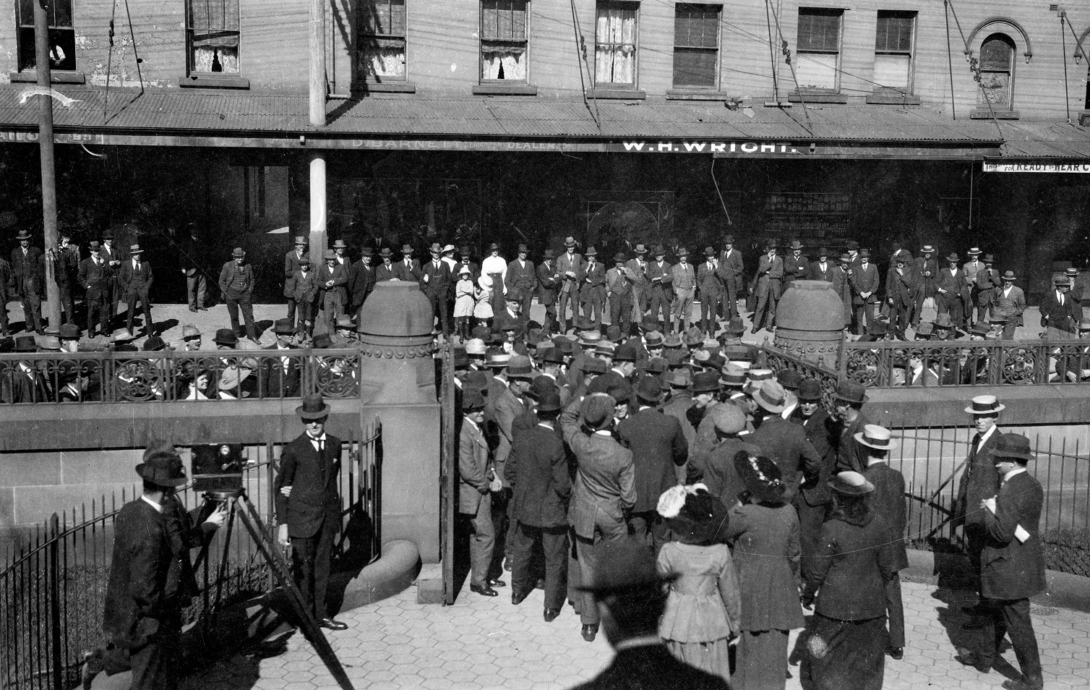 Crowds gathered outside the Central Police Court on Liverpool Street during the trial of three of the strike leaders, on charges of conspiracy, during the Great Strike of 1917. Image courtesy of  the State Library of NSW.

“People were coming back from World War One after being conscripted by The Australian Government and they were given a standard survey to fill out. One of the questions was asking them whether or not they agreed with The Great Strike. It was an interesting fact that the ones who said yes were not given jobs, even after serving their country,” says Gohier, who was clearly moved by this.

“My work for this show is made up of prints and images that relate to the great strike. The work is in the format of a snakes and ladders game, but I have replaced the ladders with rail way tracks and set it up in the shape of a figure 8. Like a snake eating its own tail,” Gohier explains.

“The figure eight relates to the ancient symbol of infinity, and dreamtime but it’s also a reference to the 8 hours work, 8 hours rest, 8 hours sleep that the strikers campaigned for,” Gohier explains. 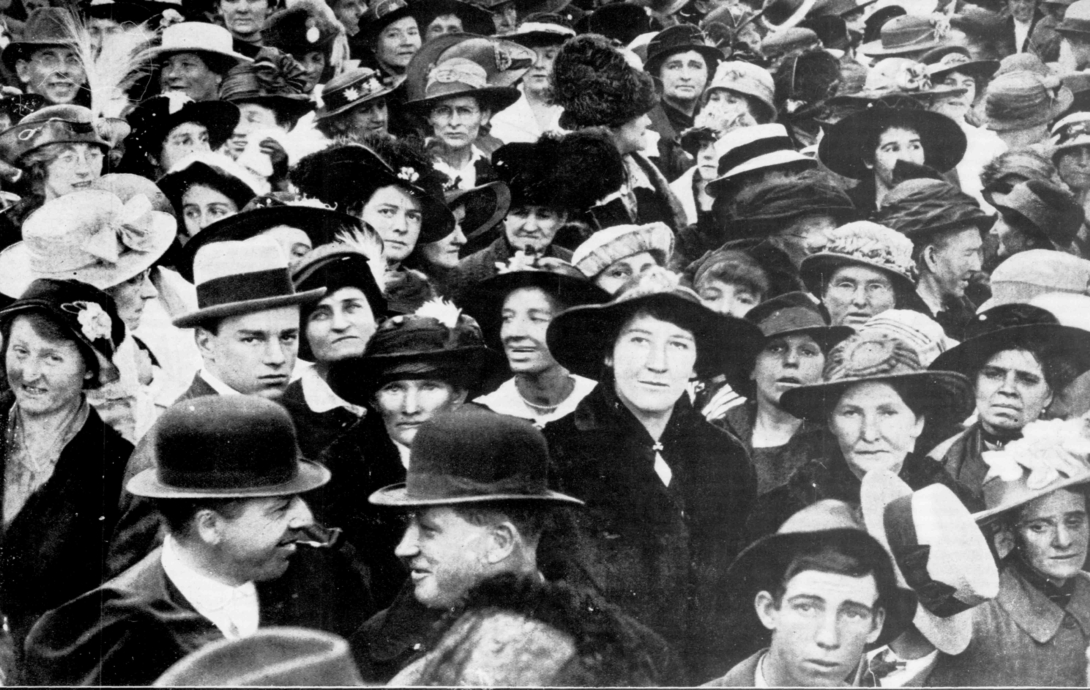 A large demonstration of women outside NSW Parliament House during the Great Strike of 1917. Image courtesy of the National Library of Australia.

Sarah Contos took the opportunity to interact with historians where she became engaged with the way people presented themselves in photographs. “I was taken by the pride all the workers took in their work and the way the women dressed when they were photographed. I think originally the curators got me involved to look at women and that side of The Great Strike, but it actually took me a long time to find a way in.”

“The work I have made is like a banner and it is about 3 x 3 metres in shape. It’s kind of a muted palette, of black, khaki and linens and then I put touches of me in it, like silver lame and the purple fabric.” 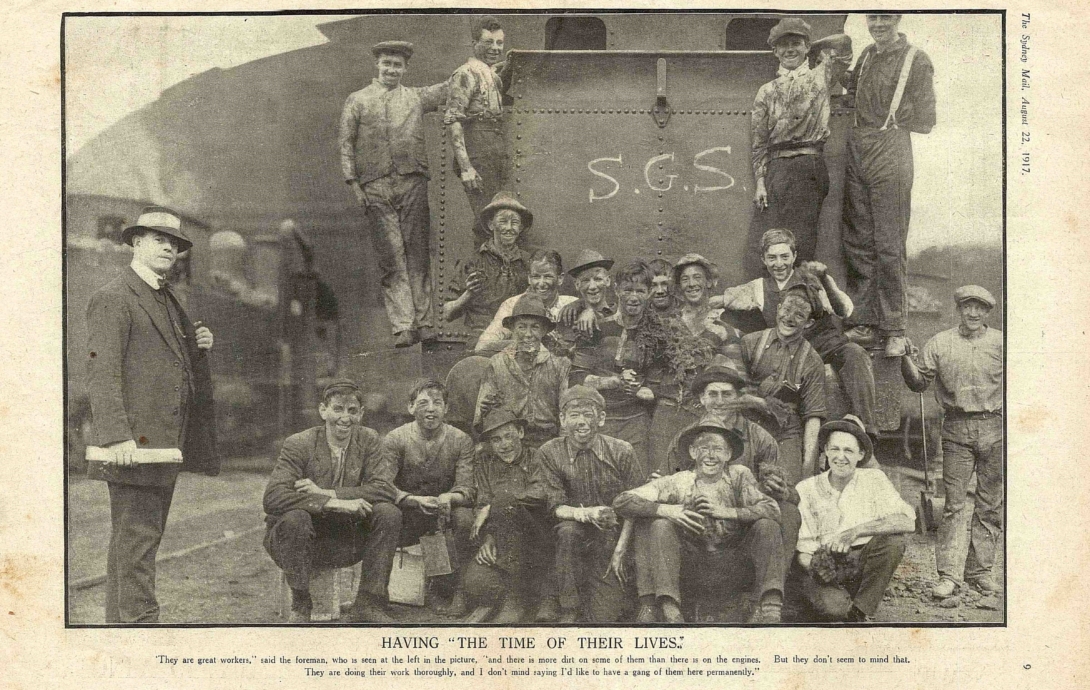 Schoolboys from Sydney Grammar strike-breaking at the Eveleigh Railway Yards during the Great Strike of 1917. Image courtesy of the Sydney Mail.

“The women were involved indirectly in supporting both sides. Because there were the strikers and the scabs – who took the jobs of the striking workers. I found the women on the whole were more interested in looking after the wellbeing of people. That fundamental side of just looking after people, feeding people and caring for people.”

“So in the end, I didn’t want to make a quilt for this exhibition, but the quilt format just lends itself so brilliantly to the themes that I was interested in. The visual elements like chains, gloves and things that are handmade.”

“The banner aspect of it might look political on the surface, but it is not expressly political. I don’t use text at all in my work normally so it was a bit tricky. It is not positive to negative. It rather has elements of both positive and negative,” Contos explains. 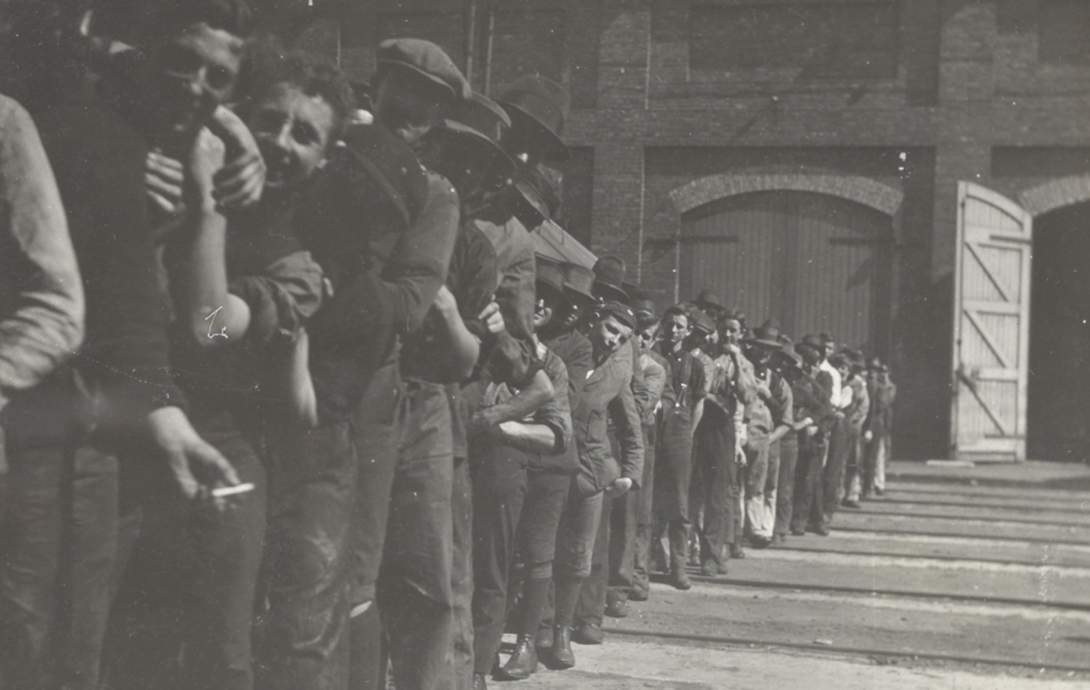 Schoolboy strike-breakers at the Eveleigh Railway Yards during the Great Strike of 1917, queuing for dinner. Image courtesy of State Records NSW.

The incredible and always innovative director of Carriageworks Lisa Havilah says she is extremely passionate about bringing to light the recent history with The Great Strike exhibition through the work of contemporary artists.

“While the industrial action of The Great Strike lasted for six weeks, its consequences lingered for decades. Carriageworks has engaged contemporary Australian artists to respond to this major historical event that occurred on our site, with each artist creating new work for the exhibition.”

In partnership with BresicWhitney, Carriageworks and the City of Sydney co-present the free public exhibition – 1917: The Great Strike – to commemorate the centenary of one of Australia’s largest industrial conflicts, taking place at Carriageworks from 15 July – 27 August 2017.