They’re cute and trendy, but amid our industrialised system of food consumption, urban farms are a protest, a rebellion, and becoming a necessity.

“We’ll die without compost,” says Pocket City Farms urban gardener Adrian Baiada. He beams with a mix of lighthearted enthusiasm and deadpan seriousness. This is a guy who, once emerged from a fit of inspiration, saw his apartment walls covered in Post-It Notes concerning all-things food, sustainability, and the environment. In the middle, in capital letters, he’d scrawled ‘COMPOST IS THE ANSWER’. 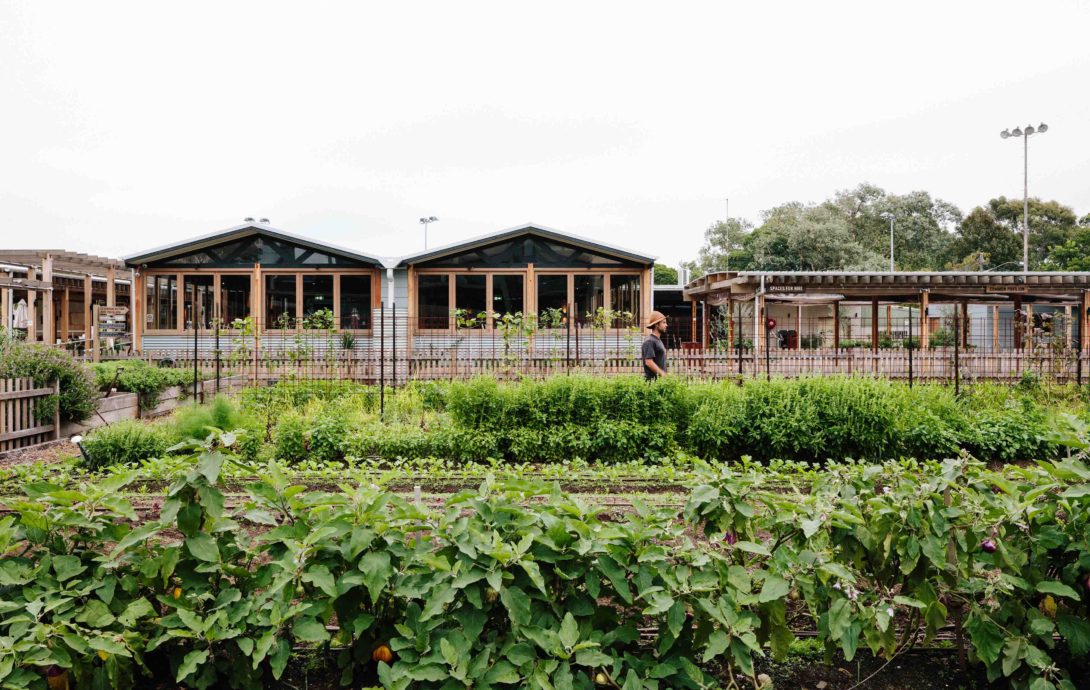 In Sydney, Camperdown Commons will have been open a year this winter – a bright beacon of hope for these ideals. It’s where Pocket City Farms and Acre Eatery brought a new type of green to an old bowling club.

The neglected space has grown into an organic farm and a leading farm-to-table dining experience. The 350-seat eatery (Acre) bar and takeaway was one of 2016’s more ambitious openings. The dining aspect is the brainchild of John Tully and Luke Heard, who previously consulted on The Greens project in North Sydney. 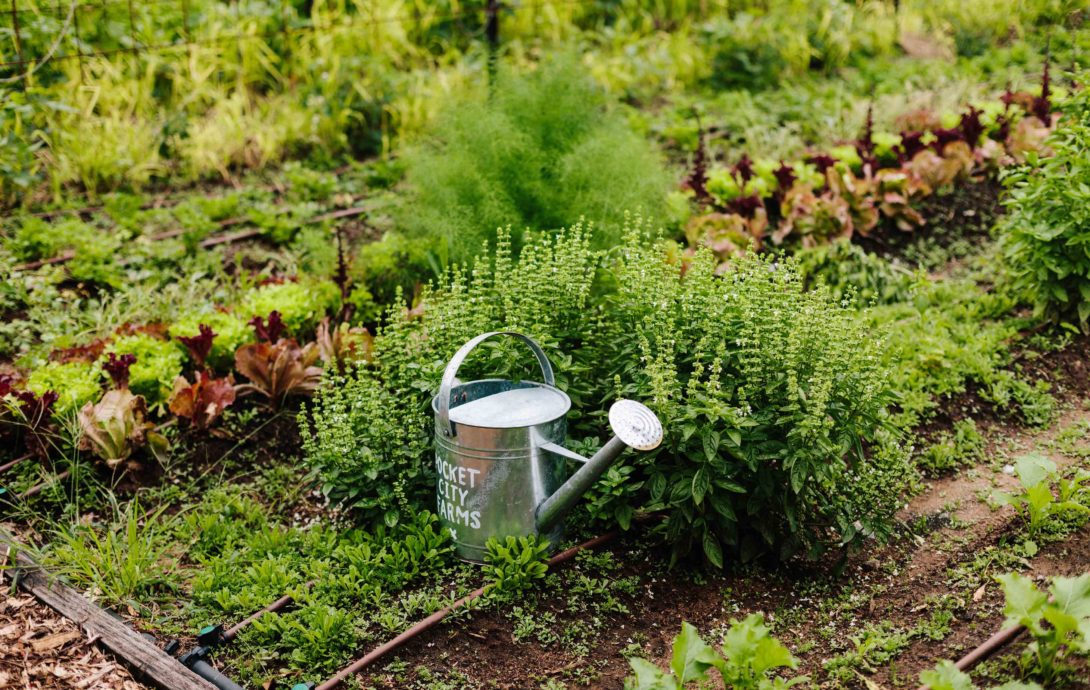 Next door, the farm seems like a romantic notion. But it’s grown into more than that. Before ever yielding its first lettuce, the urban farmers were determined their plantation would make a difference… perhaps globally. The Community Compost Bins are one example.

A huge amount of organic/food waste is buried in our landfills each year. Without air, this matter percolates in its own greenhouse gas emissions, causing more than 3% of Australia’s total methane output (which has 25 times the global warming potential of carbon dioxide).

Composting increases carbon in the soil, reducing the effects of climate change. Spreading compost on land reduces the need for water by around 30%, improving soil quality helping Acre serve up better produce. 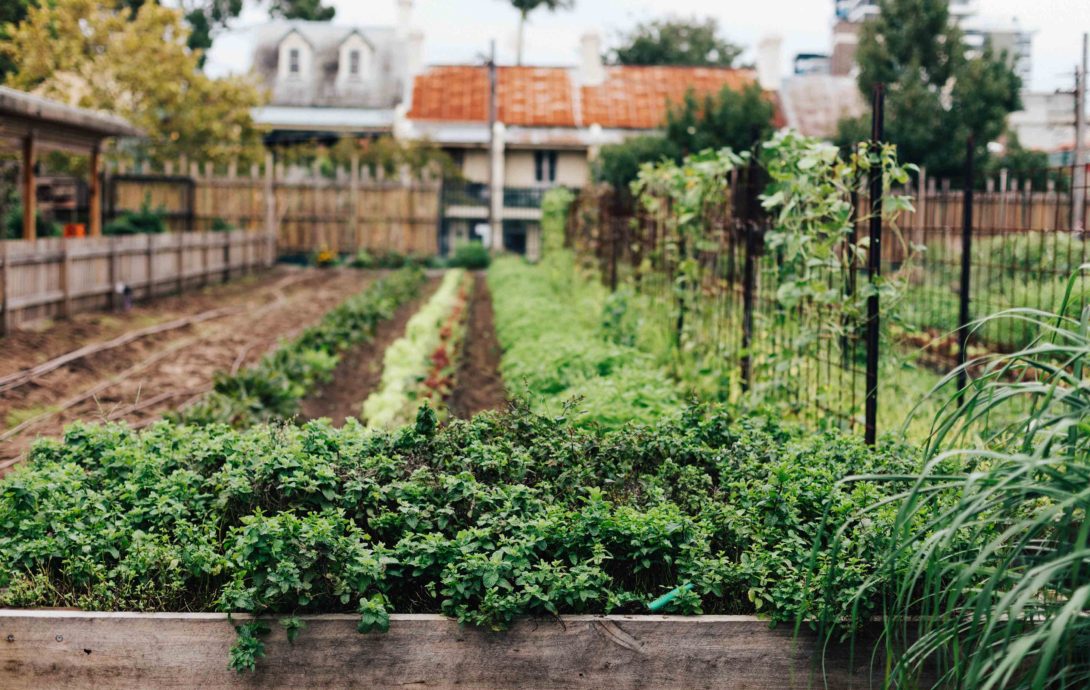 Dreamily marketable, their farm-to-table symbolism spurs further community initiatives. With the potential to lead, teach and inspire, it could also live or die based on its own success.

“We’re trying to demonstrate how many people it takes to create X amount of food and how that equates to these tiny ideas on your plate,” Adrian says. “Right now, we’re overusing planet earth by 1.5 times to sustain ourselves.”

“We want to investigate whether city residents with a big space can grow produce as a viable business model. Can we survive selling our produce to the restaurant? Then, can Joe Blow rip up his grass and grow lettuce and kale instead? As an occupation change, maybe not. But there’s a bigger picture here.” 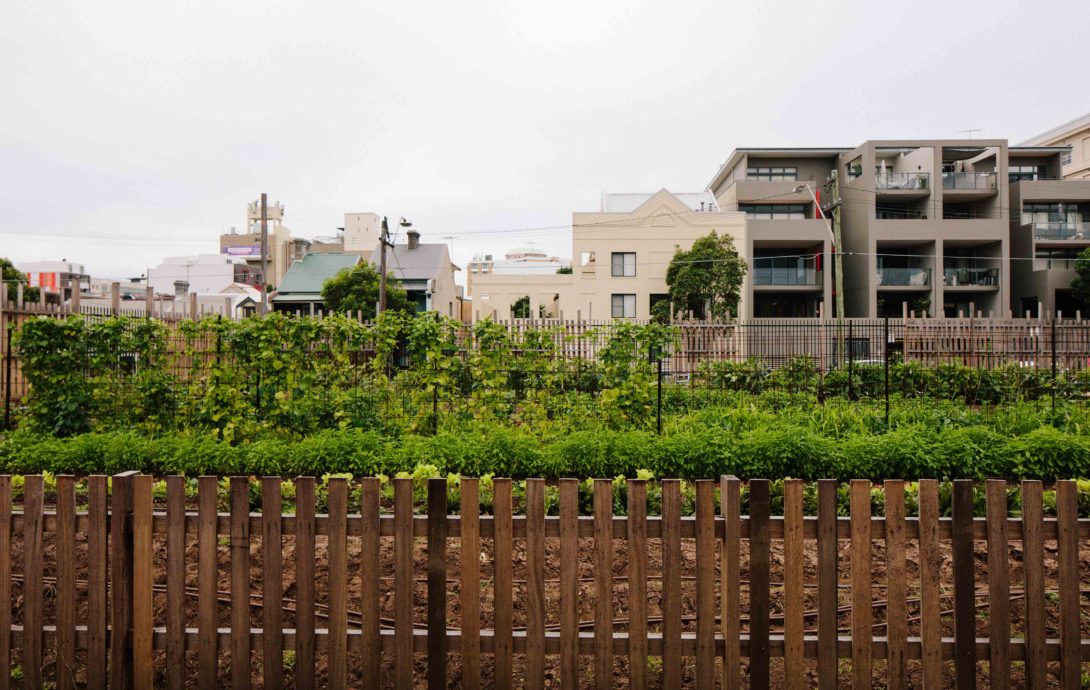 “Our farmland is shrinking. Our food sources are shrinking. But our population is expanding. We have a population of 25 million and we grow enough food to feed 600 million people each year. Most of it goes elsewhere, overseas, or we waste it.” Farm-to-table concepts attack this intrinsic wastefulness like no other movement.

On a global scale, our wastefulness is scarier. Food is the single largest waste component (by weight) in the US. Americans throw away more than a quarter of the food they buy and prepare – about 44 billion kilograms. It sits in landfill, creating methane, never breaking down.

A recent University of Arizona study uncovered still-recognizable 25-year-old hot dogs, corncobs and grapes in landfills, as well as 50-year-old readable newspapers. At the same time, the US EPA found that a blanket of compost on landfill could reduce methane emissions by as much as 100 percent. 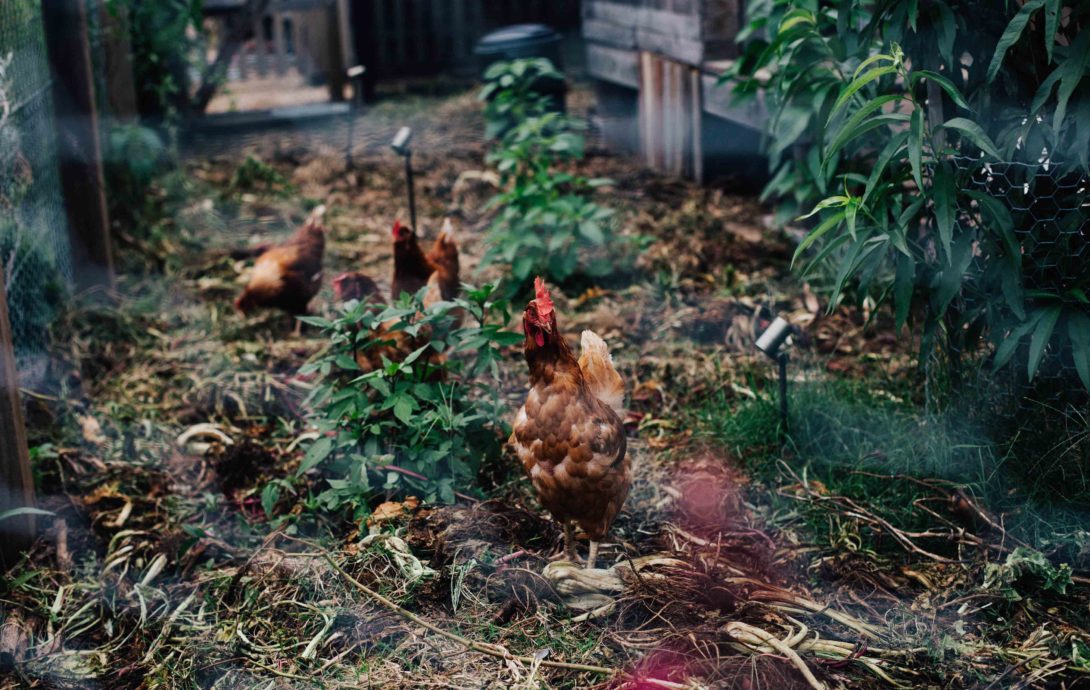 “Just because we’re excited about sustainability and new flavours, it doesn’t mean we understand how we’re intertwined with our environment,” Adrian says. “From talking to people in working kitchens, you still find chefs who get excited about cattle that eat only corn. No one talks about ways to boost the nutritional value of the grass they’re supposed to be eating. No one talks about the ecological footprint and the whole story behind these indulgent ideas in food culture.”

“City farms aren’t about being different. They question where our domestic food might come from in coming years. It’s a way to look at a problem and rethink the way we see urban spaces and our cities. By saying ‘a bowling green can be a source of food, education and more’, we’ve decentralized food production.” 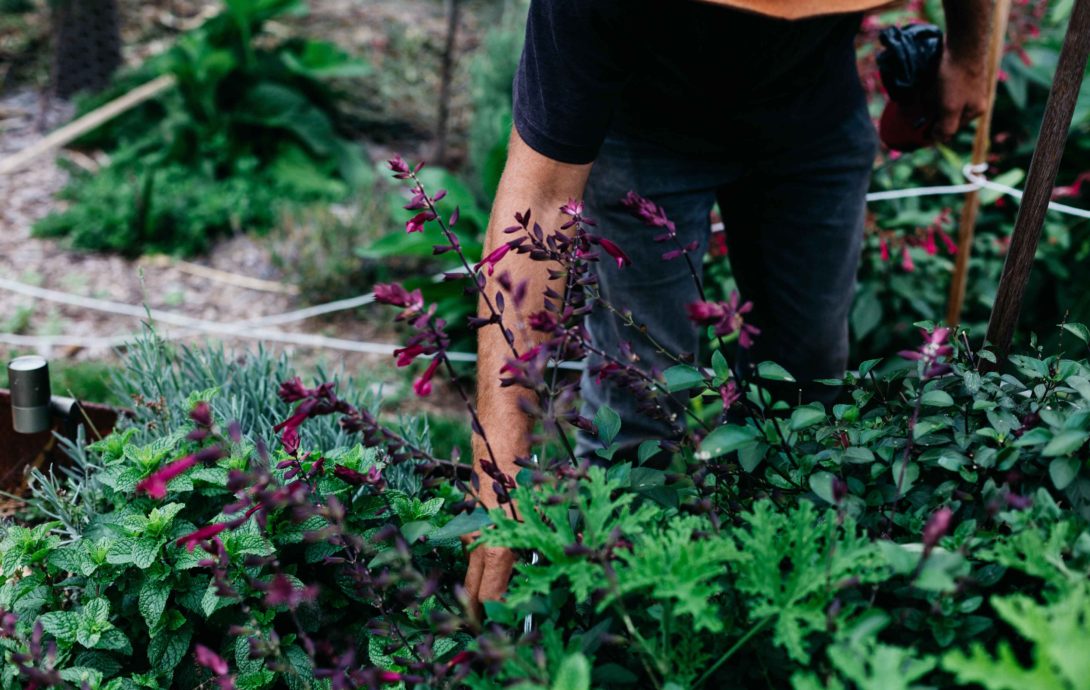 History tells us this ideas works. When Cuba was cut off from trade with the Soviet bloc in 1989 (already excluded from international trade due to US embargoes) the country was in a food crisis. Cuba lost its access to animal feed, fertilisers and fuel, while a collapse of a transport and refrigeration network followed. What happened next was a green revolution.

“That’s not a fashion statement. That’s just people doing what they need to do to survive,” says Adrian. “When you don’t have oil and petrol and all these other things that control the industrial system, you do what you need to do.” 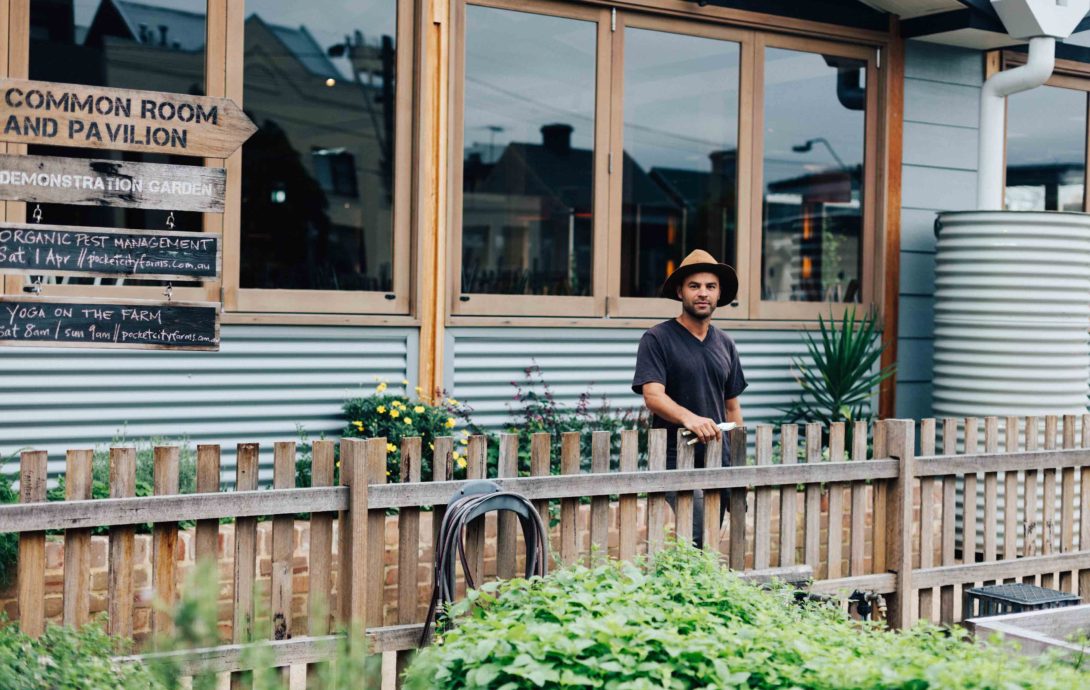 In the past year, a steady stream inner-city individuals and organisations have passed through Camperdown Commons. They ask questions about activating their own patches of urban land, rooftops and carparks.

“That’s the beauty of these farms,” Adrian says. “They look nice and trendy but this is revolutionary sustainability, with real backbone.”