Shannan Whitney on presenting homes: “We’re very afraid of being different and not being part of the crowd or part of a certain template that we’ve convinced ourselves that repetition is part of the successful ingredients for a sale.”
Category: Neighbourhoods
Author: Peter Wood
Photographer: Aimee Crouch
Creative Direction: Grant Stewart
Share with:

The idea of showcasing an original house in its untouched state isn’t new, but there is more to presenting Sydney’s unique homes than seeing them as ‘renovated’ or ‘unrenovated’.

When BresicWhitney secured the listing at 54 Toxteth Road, Glebe, it was partly for Shannan Whitney’s approach of being the only agent who said ‘don’t touch it’. According to Shannan, more examples should be appreciated in their own right as snapshots of Inner Sydney life.

“It’s not about simply showing this home in its unrenovated state and we shouldn’t look at properties in a binary way like that,” Shannan says.

“With this particular home in Toxteth Estate, if you touched it, I think you’d just destroy its immediacy and miss the attention of the market, while any story behind the home becomes lost.

“Agents and owners love to intervene with changes, staged environments, or surface improvements, which often erode values without any benefits, simply by suffocating or removing the very things that make something alluring and desirable for so many buyers.

“We’re so privileged to be brought in to look at a property, seeing firsthand the influence of owners’ lives, past-owners’ lives, remnants of a house’s history and insights into a home’s personality, which can be demonstrated in many different ways.

“That’s what brings people in, ignites conversations, and builds an exciting narrative.”

But every home is different.

It was a contrasting story across the road at 35 Toxteth Road, Glebe, a novel approach just culminated with 4 bidders competing at auction, selling for $5.7 million.

A family home of separate living and entertaining spaces, the house was sent to market with new painting using a colour consultant, specific artworks curated to fit each space, with selective use of styling ads the final piece.

“We looked beyond typical styling for broad appeal,” Shannan says. “This instance was more about optimising a particular house to highlight different areas, creating a better experience for buyers.

“It became a genuine point of difference there, while celebrating the uniqueness and personality of a house can excite a buying market that do want to be inspired.

“We’re very afraid of being different and not being part of the crowd or part of a certain template that we’ve convinced ourselves that repetition is part of the successful ingredients for a sale.”

Nearby on the CBD fringe, anyone who has ventured through 8B Dick Street, Chippendale has probably wondered what the space might look like behind its medley of past lives. An artist’s workspace and residence, it’s home to a maze of oversized artworks, easels and drawing boards, shelves full of paint tins, piles of canvases and other mediums.

But most inspectees have come armed with a natural affinity for seeing beyond the beautiful chaos, ready for an experience of how other people love to use their space.

“Agents and owners forget how much this plays into the process when buyers are considering a home.

“I think it’s more interesting to see people walk into a home such as Dick Street, especially older and more affluent buyers, who are stepping into an exciting art space as an experience, with a lifetime of someone else’s stories unfolding around you.

“That has given everyone a sense of intrigue and excitement.”

Back in 54 Toxteth Road, Glebe, it’s obvious this house has the potential to do the same. The home is a time capsule of eras, transporting you somewhere between its Victorian period while weaving a story of the decades between then and now.

Picture frames line the full length of the hallway, and exploring the different rooms tells you it was well loved in the 1970s and 1980s. The original door handles have been retained, and any additional vintage details now live in decorative fireplaces, boxes and various nooks throughout the home.

To be fair, it’s the type of place that would work with a lick of white paint and some staged on-trend books. But that would mean you might miss the Florence Broadhurst bathroom walls or the original Star Wars wallpaper that went up when it was the current vendor’s childhood bedroom.

“Who would have thought period early-entry architecture combined with 1970s wallpaper was a good idea,” Shannan says.

“This could have been one of those situations where you get further away from the house’s origins or its authentic self. And I think that would have removed the mystique, translating into a reduction in engagement from potential buyers.

“It’s disappointing to think that the styling would be the same in every house. We should be questioning whether we’re adding anything by doing things exactly the same every time.” 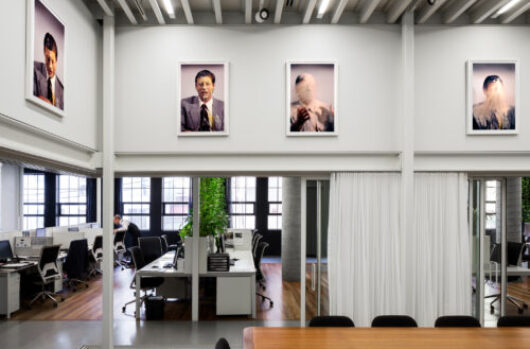