Balmain residence in a former convent

A unique home in this former convent and 1876 Victorian Gothic landmark.
Category: News
Share with:

Converting this 1876 Victorian Gothic convent has created an extraordinary family home, with natural light and views across the city.

A significant Sydney landmark with 702sqm internal space, the quality and heritage is on show throughout its substantial 4 levels. With an internal lift and large 676sqm of land, it has been both future-proofed for new buyers, and sympathetically landscaped within its original surrounds.

Formerly the Convent of the Immaculate Conception, notable architect Edmund Blackett designed and constructed the original building in 1876, with the south wing added in 1896. It’s widely considered to be the finest example of Gothic Revival architecture in the area.

Listed on the NSW State Heritage Register and with the Inner West Council as an item of High Local Significance, the building originally housed 10 Sisters of the Good Samaritan and 30 boarders, with an additional study hall able to seat 300.

At one time, a renovation divided the original convent into three residences, with the South Wing further split into three apartments. In a nod to preservation, a 2011 renovation gutted the apartments and reunited the space to its former/current form. 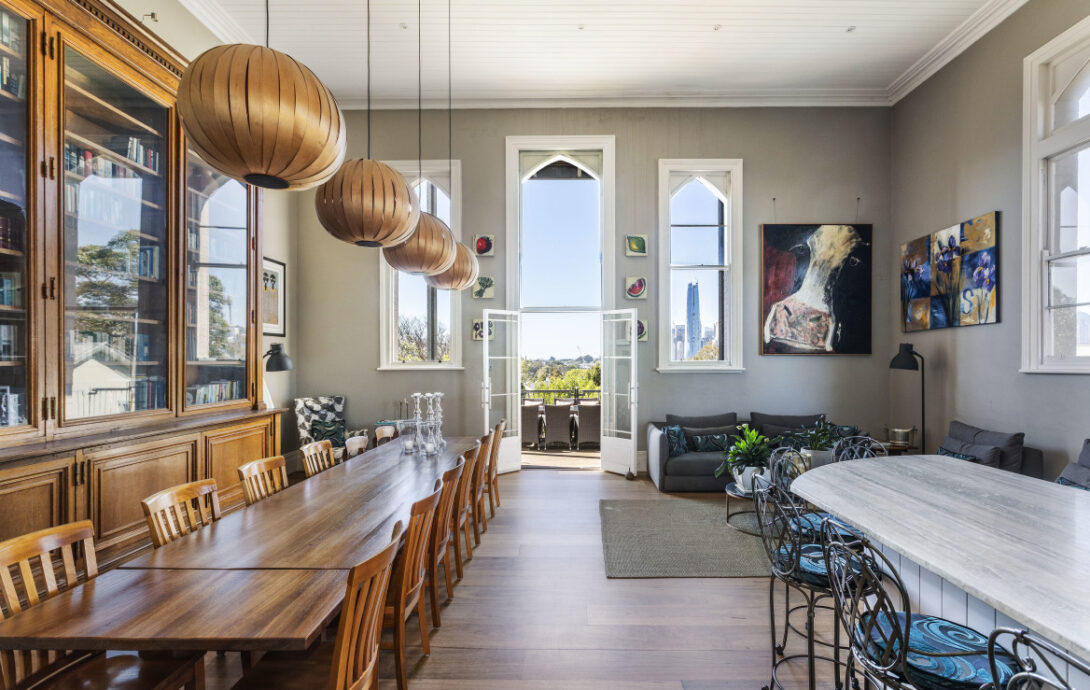 In the Balmain Peninsula’s highest point, the 210-degree views are iconically Sydney, stretching from St Leonards to North Sydney, taking in the Harbour Bridge, the CBD skyline, and the Anzac Bridge.

The enormous volume and sense of space is enhanced throughout with ceilings up to 8m. Italian travertine marble and custom cabinetry is in theme with the prestige of the home.

Modern features include the self-contained guest space and apartment accommodation, plus a master retreat with its own living space

With a full gymnasium and a 600-bottle custom wine cellar, the home is well equipped with more than 7 bathrooms, home offices, and is flexible with its multitude of bedroom configurations.

On a dual-street-frontage block, it has existing council approval for a swimming pool, as well as potential for 4-car garaging.

With quality preserved throughout, some of the finer details include kauri floorboards and Australian cedar doors. The structure itself is impressive too with buttressed brick walls – 5 bricks thick at ground level, moving to triple brick construction for the upper floors.

Part of Balmain’s historic streetscape, this residence is well positioned in an area rich in fine dining, cafes, shops, boutiques and pubs, as well as being a short walk to the ferry wharf and harbour-side parks.