The thoughtful refurbishment of a Balmain Village icon.
Category: News
Share with:

In the heart of Beattie Street and a block from Balmain’s famous village, it’s unexpected to be stepping away from the Peninsula buzz into this unique 1860s residence.

Completely rebuilt with thoughtful modern details and sensitivity to its heritage, this is one of the best Balmain homes you’ll see all year. Online with BresicWhitney here. 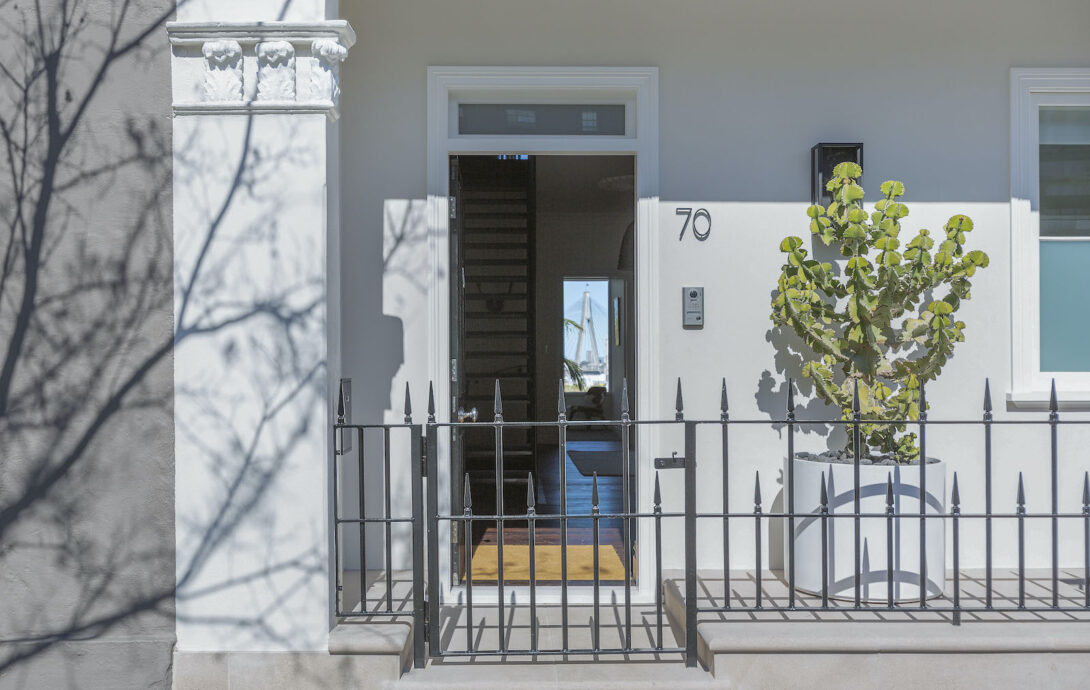 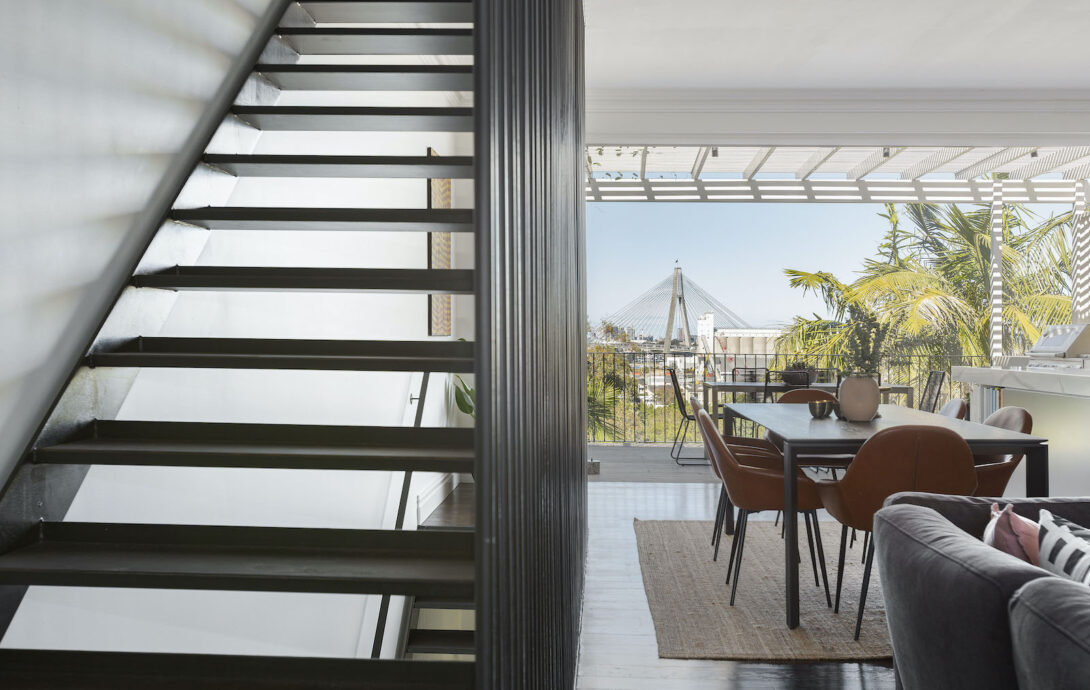 In the sudden peacefulness, the first thing that commands attention is the elevation. The space reveals itself as a 4-level house and a sprawling residence with a flexible design.

“We design homes for ourselves but with someone else in mind too,” says owner Holly Orsman Smith. It’s one of a number of luxury renovations she and husband Alastair Smith have made their own over time. This one has been 3 years in the making.

As you admire the personal touches and craftsmanship, it’s hard to believe they ever intended on selling. But then again, with its separate living spaces on multiple levels, the home has been carefully planned to suit a newly-growing clan, an already-extended family, in-house entertainers, work-from-home professionals, or au pairs. Maybe even all that at once.

“You really do spend a lot of time thinking about the personality of a home,” Holly says. Who is going to enjoy it? How will they use it? That’s different for everyone and it’s a very personal thing.” 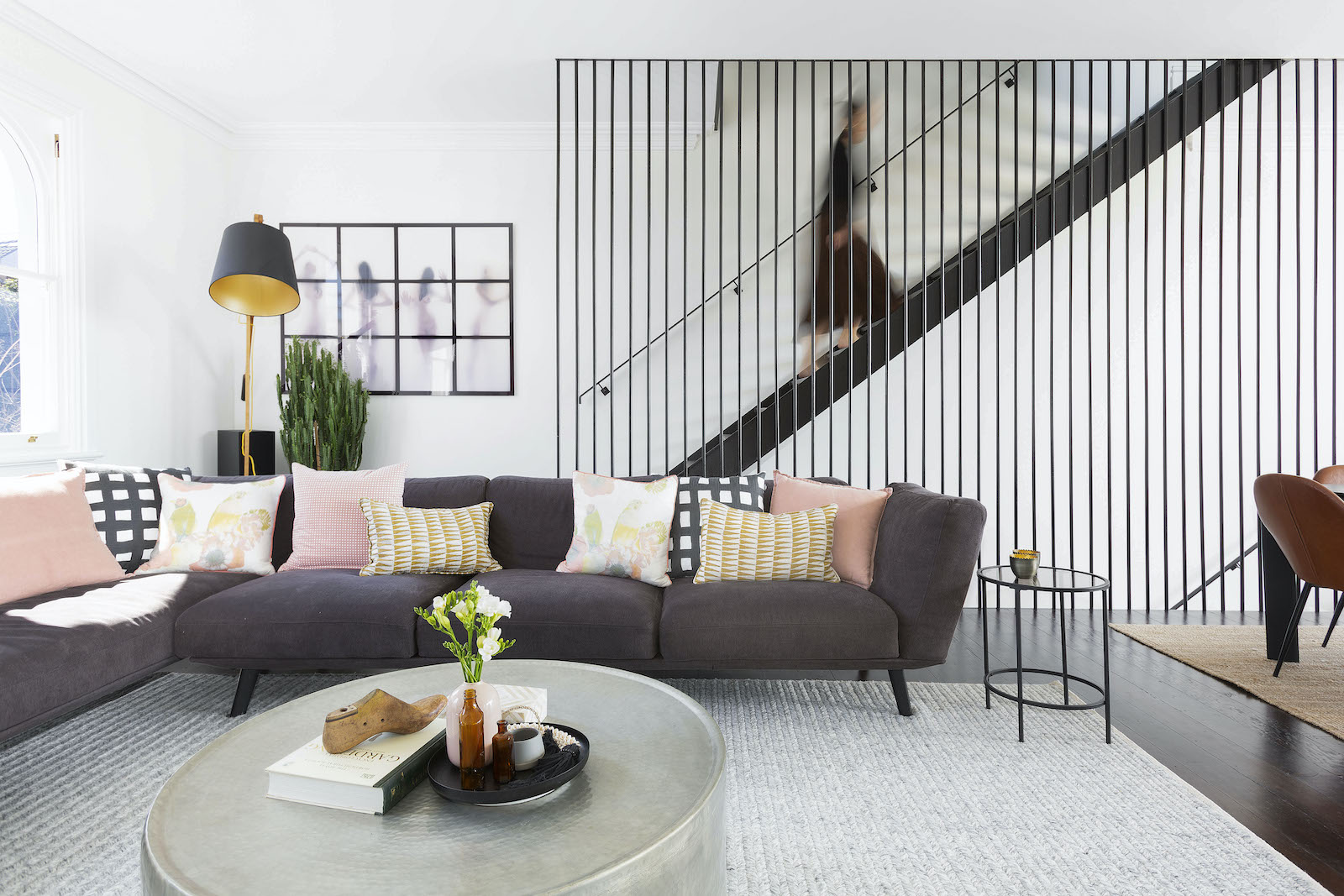 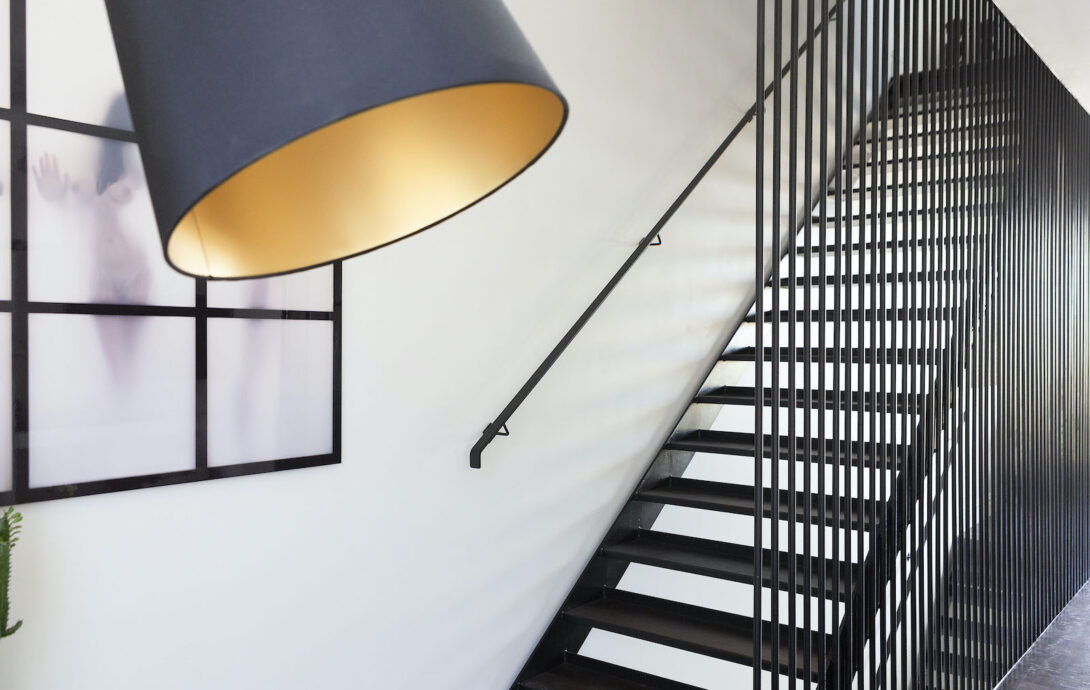 Its past is open to interpretation too. Locals say it was a brothel before it was a mixed-use commercial space. At some stage it fell to squatters and was one of the more notorious hovels of Beattie Street.

No one had looked under the floor tiles in years. Holly and Alastair got busy jackhammering to reveal the King Billy timber floors. Made from conifer pine trees endemic to Tasmania, and found only in highland rainforest areas above 600m, it took most of the 3 years to salvage similar flooring to match, having to be reclaimed from demolition sites, and hauled across states.

At the back of the home, the oversized windows frame leafy outlooks across Sydney. It takes in both the Anzac and Harbour Bridges, the CBD skyline, and the White Bay Power station. Iconically Balmain. 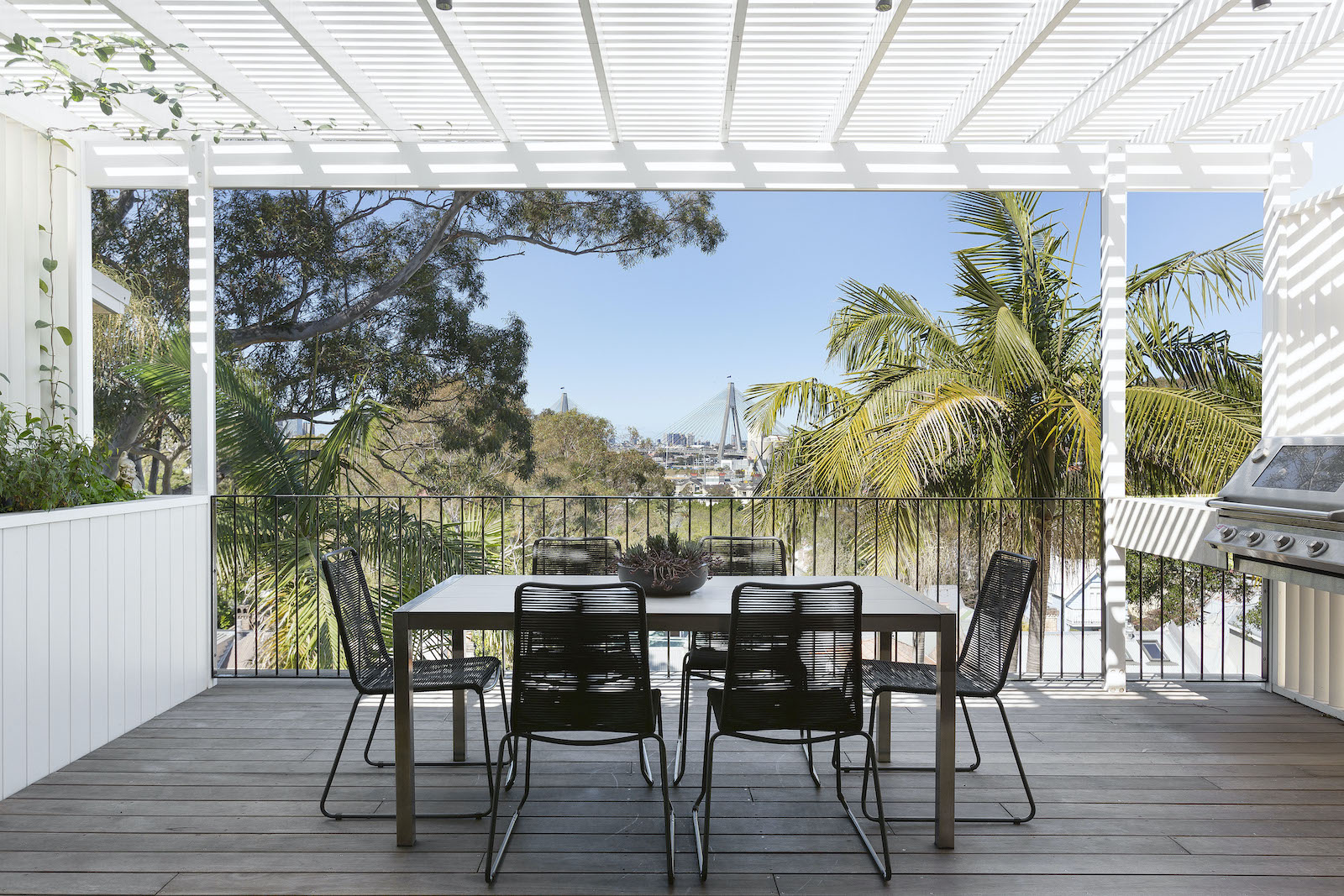 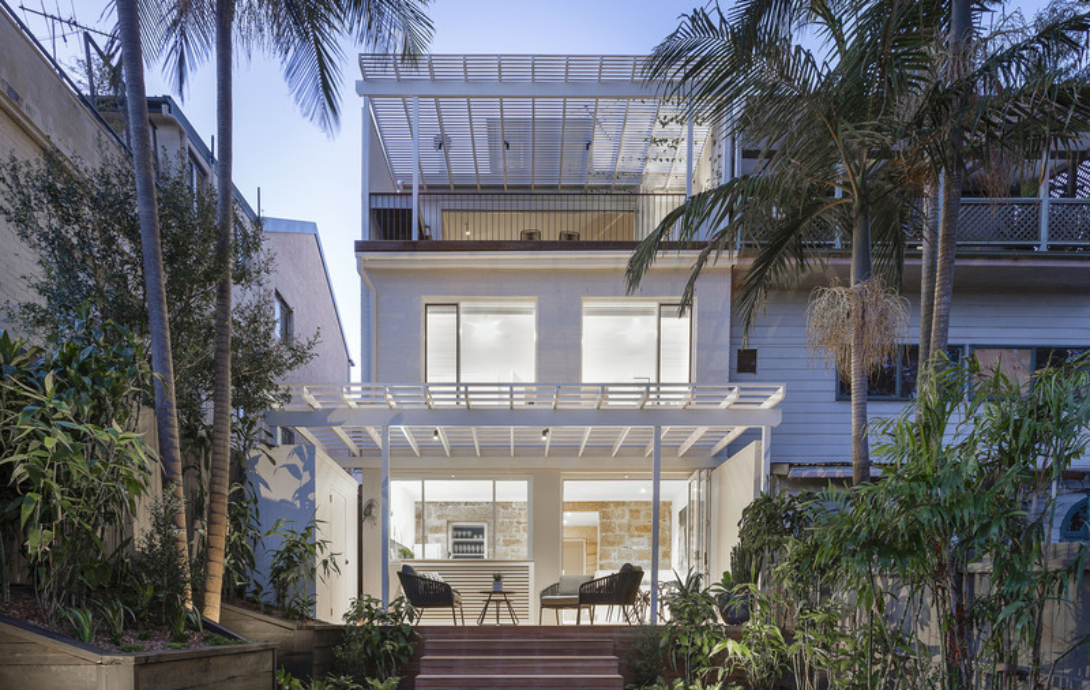 With Alastair being a chef-turned landscape designer, the cooking space is a luxe centrepiece of the home. On the back deck, the outdoor kitchen with BBQ plays a part. The lounge with its Jetmaster fireplace is a working wood heater, with the original chimney reinstated.

Downstairs, a semi-self-contained living space opens into the gardens. With an oversized door on the staircase to keep things separate, it can be as private or amalgamated as it needs to be. Its current guise is a sophisticated cocktail bar with a feature-lit wine cellar. 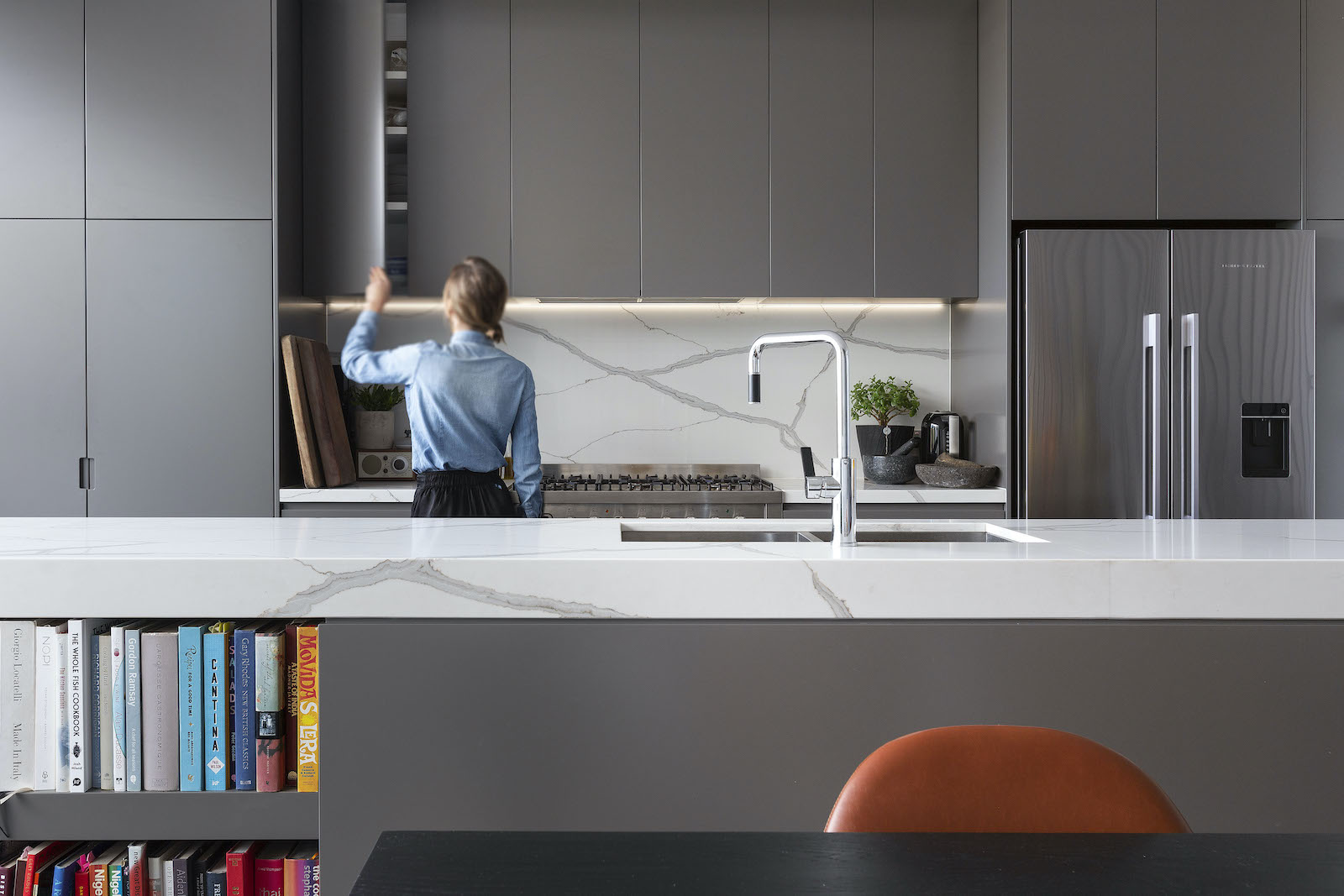 The original interior sandstone has been exposed and celebrated as part of the design, and everything ties into this with natural stone finishes and neutral details, from the pergolas to the timber paneling. 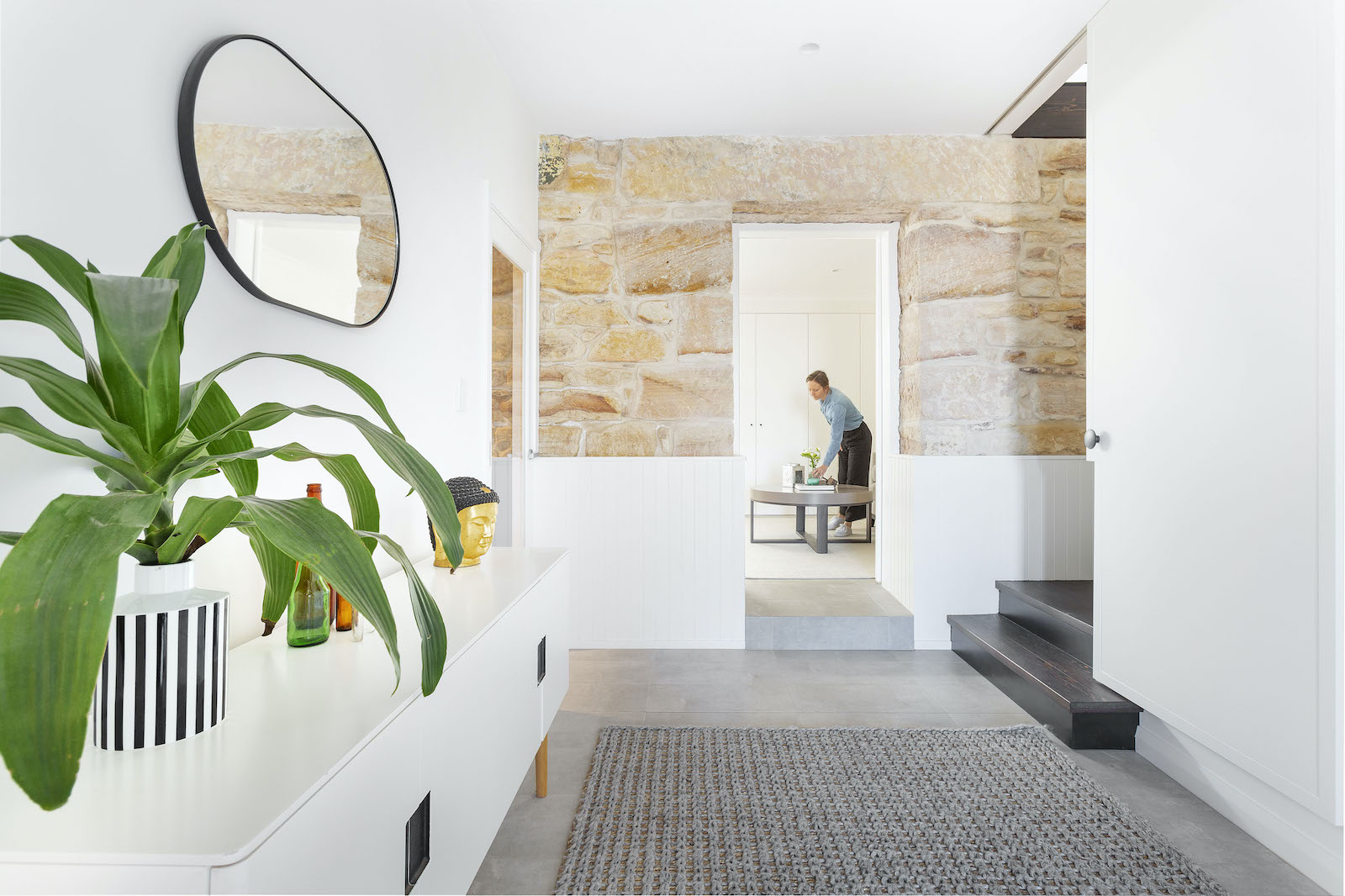 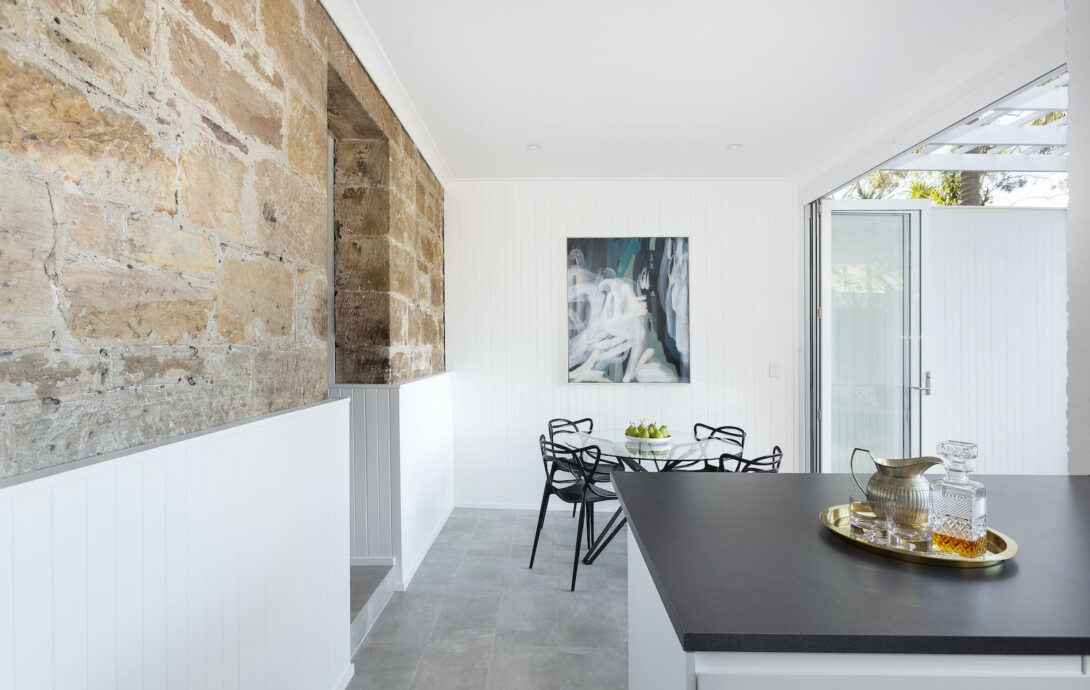 It’s an urban home but it doesn’t feel that way. This ridge line is frequented by cockatoos and rainbow lorikeets, and they’re celebrated down the side of the building too. A reminder to look up, the birds are subtly immortalised in the paintwork thanks to local signwriter Gary Higgin. Perhaps better-known about Balmain for his lettering in pubs and eateries, it’s a nod to the way this space sits within its historic elements, both the natural and the built environment.

“Once you’re here… all the hustle out there… you leave it all behind,” Holly says. “I love the escapism of this place. And I love the excitement that it creates.”